Zarai Taraqiati Bank Limited essentially an agriculture bank of the country has gone
through various economic phases and leadership eras during past five decades. It has seen
many highs and lows and has come a long way since its inception in 1961.Its early
operations began in the rural areas of the country by providing much needed finance to
the cash strained and technology deprived farmers. It also proved to be an effective
vehicle in disseminating agri-technology among farming fraternity of the country in
accordance with its corporate mandate.
Formerly Agriculture Development Bank of Pakistan was established through the
promulgation of ADB Ordinance 1961 on February 18, 1961 by merging Agricultural
Development Finance Corporation (1952) and Agricultural Bank of Pakistan (1957)
aimed to provide better credit facilities to the agriculturists for development and
modernization of agriculture and small cottage industries in the rural areas. The slogan of
the Bank remained “Technology for Agriculture” throughout the yester decades and the
institution solemnly lived up to it by bringing about both Green Revolution (Agri) and
White Revolution (Processed Milk) in the country.
The bank played a historical role in development of agro-industrial sector of the country
by providing financial and technological assistance to UHT treatment milk processors,
potatoe chips manufacturers and poultry industry during the era of eighties and early
nineties. The Bank also made its mark by introducing combine harvesters to Pakistani
Farmers for the first time.
In the golden era of ADBP, it had abundance of multi-lateral sources of funding at its
disposal. Grants for technical assistance poured in from a large number of international
development agencies. Bank successfully availed credit lines from World Bank and Asian
Development Bank for above mentioned projects. However in post 90’s era all such credit
lines ceased as the focus of international development donor agencies shifted from
Government Owned Development Institutions to Non-Government Development
Organizations.
Hitherto operations of ZTBL were also financed by State Bank of Pakistan however after
1997 the extension of SBP credit lines ceased. The Bank had no option but to recycle its
recoveries to financially sustain on the lines of other commercial entities. Therefore SBP
also encouraged developing self-sustainable reservoir of funds for the Bank.
Subsequently, ZTBL launched its deposit mobilization drive and extended new banking
services to customers like utility bills collection, Hajj Applications collection, safe locker
facilities and home remittance services in the pursuit of generating an alternate stream of
funds.
A couple of years later, responding to the market aspirations of providing services to the
targeted clients, ADBP was converted into a limited company in the year 2002. It was named Zarai Taraqiati Bank Limited which sounded more farmer friendly and could
relate to the local context.
In the recent past ZTBL initiated Women & Youth Employment Schemes, Solar Tube
Well Financing, Biogas Plants Financing, Cut flower Financing, Camel Rearing &
Ostrich Framing Schemes, Vegetable & Fruit Drying Plants, Gurr-making & Tobacco
Barn Scheme, Go-down and Warehouse Receipt Financing Scheme. Yak farming scheme
for Gilgit Baltistan region was also launched. Crop and Livestock Loan Insurance
Schemes were also implemented in order to mitigate losses of farmers during natural
calamities and perils. On deposit side it offered Business Deposit Account, Rozana
Bachat Account, PLS-Term Deposit, Zarai Munafa Term Deposit, Mustaqbil Mehfooz
Account, ZTBL Senior Citizen Account,Kissan Assan Karobar Account, Assan
Remittance Account and ZTBL Junior Account in addition to the regular current, saving
and basic banking accounts.
Many new measures were taken for growth and expansion of business operations. As a
result of these measures On-line Banking and NIFT facilities started off. A treasury was
established for the first time in the Bank in year 2012 in order to generate income by
investing Banks’ surplus funds in the money market. Islamic Banking has also been
initiated and a new Division has been created to develop Islamic Banking Products. In
order to strengthen IT infrastructure of the Bank, ERP Oracle suit has been implemented
in the Bank. The business outreach of the Bank has now been expanded to 489 number of
branches. Many new divisions and departments have been created like Liability
Marketing Division, Islamic Banking Division and Training and Development Division.
In order to strengthen administrative control, field setups have been established in respect
of credit administration, legal matters, compliance and vigilance.
In order to disseminate technology among farmers, the Bank has been conducting field
days at different farmers training centres and trained farmers in several aspects of
agriculture including use of alternate energy resources. The Bank is also cognizant of its
corporate social responsibility and is fulfilling its responsibilities in the areas of
education, culture, sports and agriculture. ZTBL is proactively supporting a renowned
Pakistani Tennis Star, Mr. Rasheed Ahmad Malik who trains tennis players for
international participation. Another tennis player Miss Noor Malik is also being supported
by the Bank who is runner up of 2nd SNGPL All Pakistan Tennis Championship held in
May 2018. In order to revive national game in the country, KSSL (a wholly owned
subsidiary of ZTBL) established Hockey Team of the Bank in 2017. ZTBL men team has
won the Patrons Trophy Grade-II Cricket Tournament 2018 and has resultantly qualified
for Quaid-e-Azam Trophy (Grade-I).The Islamabad Regional Cricket Team of the Bank
has won 14th State Bank of Pakistan Governors’ Cup Interbank Cricket Tournament
2017-18 while ZTBL Women Cricket Team has won the PCB Departmental T20
Women’s Cricket Championship 2018 played at National Cricket Stadium Karachi during
May 2018.

Various activities at ZTBL Farm are carried out for demonstration purposes including
tunnel farming, sowing of organic winter and summer vegetables, Ostrich Farming, Quail
Farming, Fish Farming, Bee Keeping, Olive & Mushroom Plantation and Strawberry
Plantation.
During past five years, the Bank has been able to place itself on very sound business
footings and has secured AAA/A-1+ credit and entity rating from credit rating company
JCR-VIS. In the recent past, many new projects and initiatives have been kicked off in the
areas of financial inclusion, technology development and local economic development
which got recognized internationally. Consequently the Bank got awarded Plaque of
Merit in year 2018 for the fourth time in a row by the Association of Development
Financing Institutions in Asia Pacific (ADFIAP). Bank has also been able to fetch an
award for its sustainable development product from Organization of Sustainable
Economic Development in Germany.
ZTBL is playing its due role in agriculture growth by serving financing needs of about
400,000/-small farmers per annum. During last four years, ZTBL has enhanced its
agriculture loan portfolio by over Rs.45 billion while generating financial resources
through deposit mobilization of over Rs.70 billion.
Recently ZTBL participated in E-credit Scheme by Government of Punjab. In the year
2018 the Bank has planned a few measures which include a credit disbursement of Rs.
115 billion and revival of Sada Bahar Scheme (SBS). The Scheme would primarily cater
to the working capital and input financing requirements of existing and new farmers
across the country.
ZTBL has achieved a milestone by installing its own first ATM at Head Office Islamabad
while 500 ATMs would be installed by the end of 2019. These would be most modern
video call based ATMs having card less biometric transaction facilities while the debit
card will be EMV enabled. The Bank has also signed an agreement with Telenor in order
to offer mobile banking to its customers. ZTBL has been able to obtain foreign currency
license from State Bank of Pakistan for executing home remittances. It is constantly
striving to make itself a modern agriculture bank and it aims at providing a wide array of
credit and deposit products to its client in timely and hassle free manner. Despite of few
obstacles, ZTBL is still heading up hills and its future is promising under the headship of
President Syed Talat Mahmood. It is better than yesterday and will become much better
in the days to come Insha Allah. 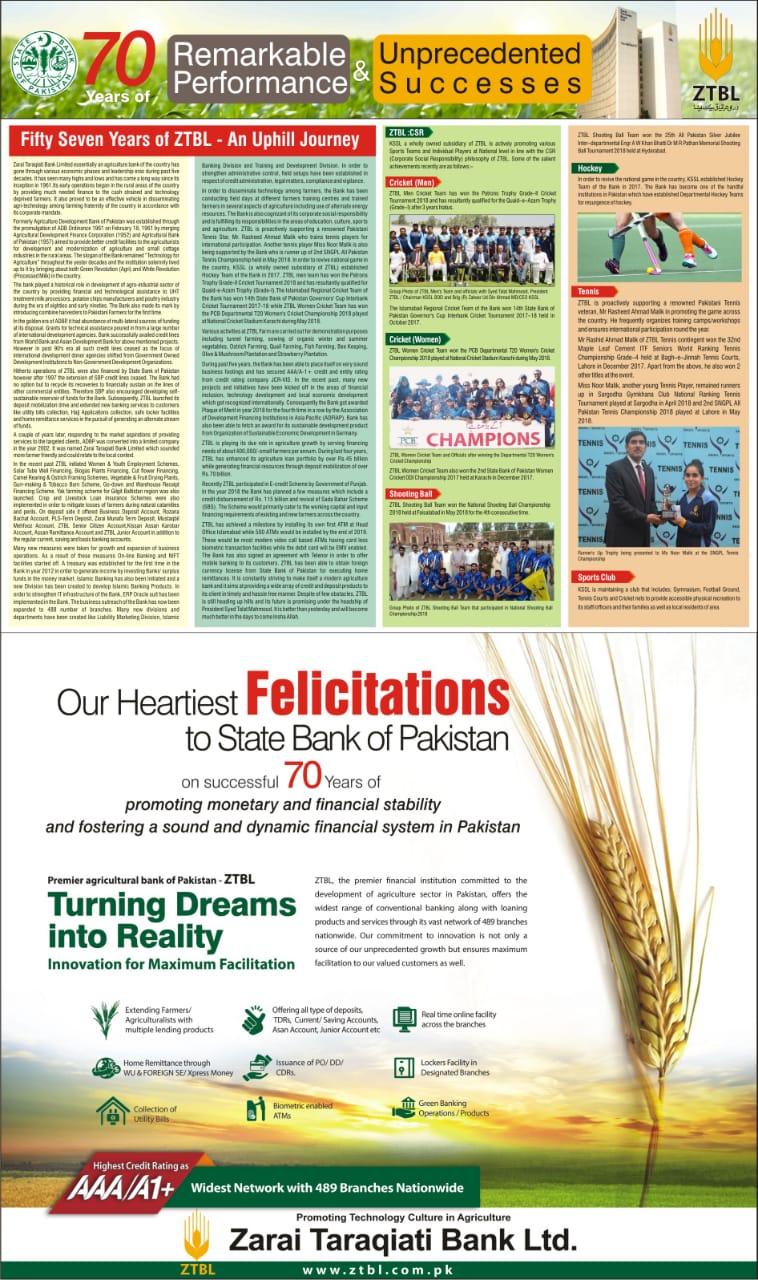 just got a lot easier with ZTBL App®

Get the latest articles and announcements in your inbox.